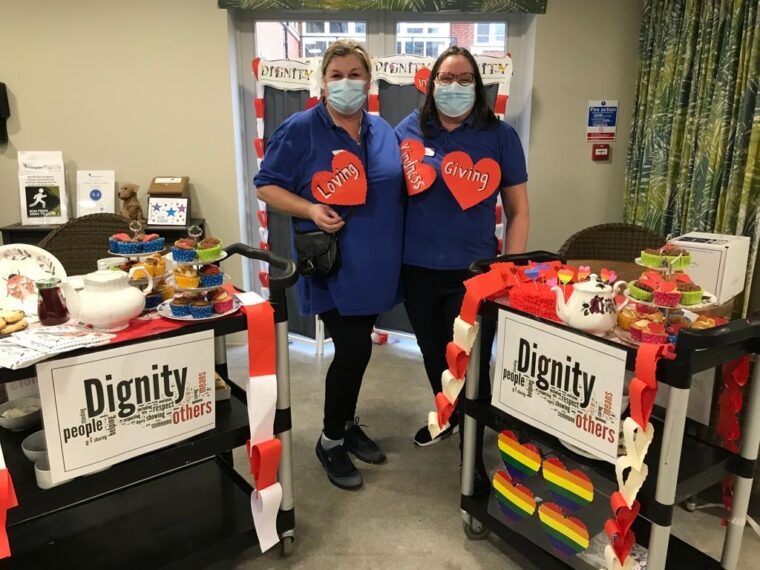 Residents and team members at our two care homes in Bocking, near Braintree, held a special Dignity Week to shine a light on dignity and diversity in care.

The week-long programme at The New Deanery and St Mary’s Court included a tea party, wear red day, cookery day and a sing-a-long musical Dignity celebration to round off the week.

The fun activities programme was launched to tie in with the Dignity in Care campaign’s national Dignity Action Day which aims to ‘put undignified care to bed’ and champion the rights of care service users.

Matron and Sonnet’s Dignity Lead Joan Sirett said: “We wanted to demonstrate and celebrate that everybody in our care homes is special and a person in their own right. Difference is good and we respect and support this wholeheartedly.

“It’s about treating our residents as individuals and ensuring they are given choice, control and a sense of purpose in their daily lives.”

The Donate £2 and Wear Red Day, plus the sale of homemade cakes, raised £133 for the National Dignity Council charity.

The week started with residents and team members’ dignity and diversity ideas being posted up on a special dignity screen in the Bistro of The New Deanery. Suggestions were posted on red and striped hearts to represent dignity and diversity. One of the most popular activities was Cookery Day, when residents iced and decorated heart-shaped biscuits.

“I think the Dignity Week highlighted how important respect is for everyone. The staff are always really patient, and they deserve to be treated with respect just as much as the residents do.”

Both homes, operated by Sonnet Care Homes, have achieved the National Gold Standards Framework (GSF) for those in the later stages of their lives, which recognises and drives continuous improvement in the quality of end of life care. 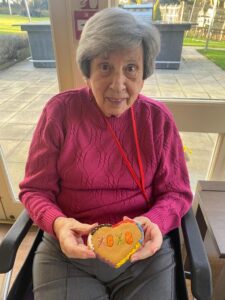 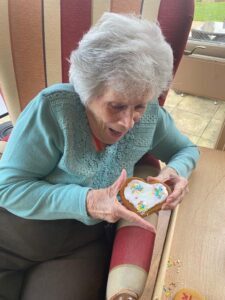 Our website uses cookies to improve your experience. We'll assume you're ok with this, but you can opt-out if you wish.

Analytics cookies help us understand how our visitors interact with the website. It helps us understand the number of visitors, where the visitors are coming from, and the pages they navigate. The cookies collect this data and are reported anonymously.

Preference cookies are used to store user preferences to provide them with content that is customised accordingly. This includes the language of the website or the location of the visitor.

Advertising cookies help us provide our visitors with relevant ads and marketing campaigns.